There have been plenty of shows based on real life: Band of Brothers, Bones, Scandal, Necessary Roughness, M*A*S*H, and countless others. Most of these shows try just to entertain, but occasionally there is a show based on real life that tries to prove a point. Orange is the New Black is one of these shows. It tells a story based on real people while also expressing issues of the prison system, excelling in representation of television, and including the LGBTQ community. All of the real events that inspired this television sensation started in 1993. 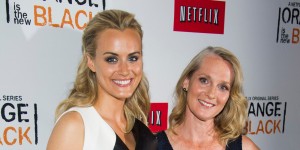 In 1993 at the age of 24, Piper Kerman carried more than 10,000 undeclared dollars into Paris for a West African drug lord. All of this would seem odd for an upper-class suburban woman from Northampton, Massachusetts, who majored in theatre at Smith College, but it wasn’t considering Kerman began a relationship with Catherine Cleary Wolters, an international drug trafficker, a year earlier. Kerman described Wolters as her girlfriend, but Wolters disagrees saying “[they] weren’t girlfriends… [They] were friends with benefits.” Kerman and Wolters traveled the world together, with Kerman running drug money only once, but they would later split. In 1998, Kerman was living in New York with her fiancé (now husband), Larry Smith, when she was indicted on charges of drug smuggling and money laundering by a federal court in Chicago. After pleading guilty, Kerman would serve 13 months of her 15-month sentence beginning on February 4, 2004, at the Federal Correctional Institution in Danbury. In 2010, Kerman wrote and published Orange is the New Black: My Year in a Women’s Prison which was a memoir of her time in prison.

This book inspired the Netflix original series: Orange is the New Black. After reading Kerman’s book, Jenji Kohan created the show whose entire first season was released on July 11, 2013. The show follows Piper Chapman (Taylor Schilling), “a woman in her thirties who is sentenced to fifteen months in prison after being convicted of a decade-old crime of transporting money for her drug-dealing girlfriend.”

The first season was an instant success and a crowd favorite, it also impressed the critics getting 12 Emmy nominations, winning three of them including Outstanding Guest Actress in a Comedy Series to Uzo Aduba for her portrayal of Suzanne “Crazy Eyes” Warren. The show also received praise for its portrayal of “real women” because of the diversity. The 13-episode second season was released on June 6, 2014, with the majority of the cast returning as well as an introduction of new characters, such as Yvonne “Vee” Parker portrayed by Lorraine Toussaint. Filming for season 3 has already begun with an expected release date in June 2015. 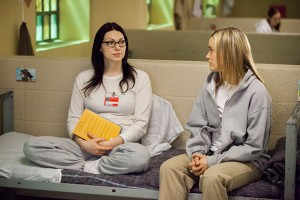 Although based on a true story, the book and TV series take steps to embellish the story in order to make it more entertaining. In order to protect the privacy of the inmates in her memoir, Kerman uses pseudonyms for all of the inmates except for Sister Ardeth Platte and Alice Gerard, whose permission was given. The TV series took even more precautions to protect the privacy of the people involved in the production including Piper Kerman herself. The TV series used Kerman’s life as a basis for the story but took several liberties in the story telling process. In the memoir, Kerman and Wolters were only in the same prison for 5 weeks, while in the series, Chapman and Alex Vause (Laura Prepon) stayed for months in the same prison. The Chapman-Vause relationship, in the TV series, escalates to a friends-with-benefits situation, while in real life that did not happen. Piper Kerman is involved in the TV series’s process as an executive consultant, and despite these changes to the true story, the series still attempts to give an accurate portrayal of what the female prison system in America is like. The TV series semi-accurately portrays the corruption in the American female prison system while also expressing the view of women, minorities, and the LGBTQ community in a manner that is hardly ever seen in American productions.

All background information on Piper Kerman that is not cited can be found in her book.

MY NAME IS GAR TATE

"There's power in looking silly and not caring that you do." - Amy Poehler

A blog on social enterprise in the U.S

Provocative Culture Has Desensitized Us

Food is on my mind, is it on yours?

The quest to conquer the digital world